What I Learned From James Clementi About Being An Upstander 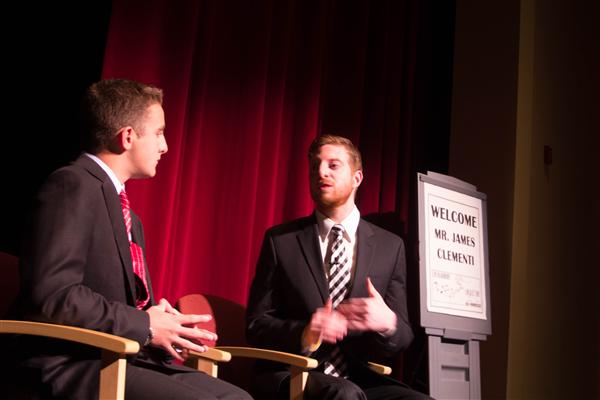 Four years and one month ago, the lives of the Clementi family were changed forever.

Meeting James and his family changed mine.

The date is October 6, 2014. I arrive at the Hartford Road entrance of Lenape High School at around 6PM with my parents in preparation of meeting the Clementi family. The entire car ride prior was characterized by nothing but tense silence; my whole family was internally anticipating the emotional magnitude of the impending meeting, eliminating any notion of small talk.

I walked through the main office and finally reached the large conference room. It was there that I met James and Jane Clementi, whose story is a humbling one indeed.

In 2010, James and Jane lost a beloved family member in Tyler Clementi, who was a freshman at Rutgers University in New Brunswick in 2010. Tyler’s roommate, Dharun Ravi, and his friends, spied on Tyler using a webcam, without Tyler’s knowledge or consent, having an intimate moment with another man. Due to the bullying Tyler endured, he was severely distraught, causing him to take his own life. In late September, Tyler typed a message into Facebook, reading simply “jumping off the gw bridge sorry”.

Tyler’s suicide gained national attention, capturing headlines and newsfeeds everywhere. The story raised awareness of the issue of cyber-bullying and bullying in general.

James, Jane, my parents and I were accompanied by Lenape’s 9th and 10th grade principal, Mr. Len Westman, and the advisor of the Lenape Television program, Mr. Peyton Ebbeson.

A month before all of this, Mr. Westman and Mr. Ebbeson had selected me to moderate an interview-style assembly with James Clementi in front of all of Lenape’s teachers and staff. I was incredibly honored and humbled to be a part of such an important and pressing cause.

After the dinner, it came time to discuss the format of the event.  Shown on the computer monitor in front of us is a video created by of the LTV executive producers, Adam Derengowksi, who produced a montage of news reels and commentaries to be shown before the assembly.  I looked over at the Clementis as they gazed frightfully at the computer. Mrs. Clementi sat, watching the news anchor, clutching her napkin, reliving the most horrible moment of her life.

Her own son. James’ own brother. A bright, talented, promising young man, was gone.

What is a mother, or a brother, for that matter, to do? To say? To feel?

The next day is October 7. I interview James, asking him a variety of questions pertaining to not only bullying in general, but what teens and teachers can do to assist in the cause. Tyler Clementi’s story is shared with the entire school.

So why, exactly, did James come to speak at our school? What exactly was the reason for all of this?

No more teen suicides. No more students feeling distress or isolation because of the actions or words of someone else.

As a student, I understand that the phrase “Be an Upstander” is thrown around in our hallways and classrooms as if it’s something to be said out of jest.

Being an Upstander is absolutely nothing to joke about. The power of standing up for another can mean the difference between emotional well-being and depression, between tolerance and intolerance, between life and death.

So when someone utters a phrase intended to hurt or offend, think of Tyler’s story.
Think of the suffering endured by Tyler and the Clementi family.

Think of the similar pain that one could be causing another.

Think before you speak.

To find out more about the Tyler Clementi foundation, please go to www.tylerclementi.org

Please note that comments are moderated. The Smoke Signal staff intends for this area to be a place where users can interact and share meaningful discussions in a respectful manner. Name and email are required only for security purposes and validation of the comment.
All Smoke Signal Picks Reader Picks Sort: Newest