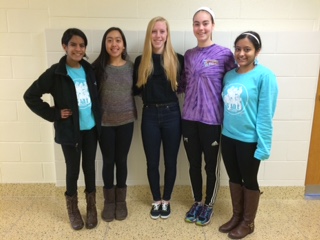 Jasmine Philip, ’17
Above are 5 of the sophomores that went on the Cooper Trauma Trip: (Left to Right) Isabel Chacko, Alexis Cao, Megan Quimby, Patricia Thomas, and Megha Bharadwaj

There were many procedures we learned about, such as how the nurses hook up the IVs and put a tube in the patient’s stomach to prevent vomiting. Daniel Delgado, the head trauma technician, also told us about the various expenses of the hospital, reminding us that hospitals are businesses, whether we like it or not.

During the trip, we heard stories about patients who had been treated there. From car crashes to gunshots, these intriguing stories encouraged us to be careful of every little choice we make, because the majority of these incidents could have been avoided with just an extra thought.

When asked about her thoughts of her experience at the hospital, Allison Zhang (‘17) stated, “I learned that there’s no one who loves us more than our parents do and while they make mistakes too, they will never lie to us and always help us as long as we ask.” This is one thing we were reminded about multiple times throughout the day by Daniel and he would emphasize that our parents want the best for us no matter what.

This was further proven by a story he told us a story about a girl who was in a situation that many teenagers go through with their parents. This girl’s parents were wary of her boyfriend and thought he was a bad influence on her. They expressed their thoughts to her and urged her to stay away from him. However, she paid no heed to this advice and was later killed in an incident involving her boyfriend’s dangerous lifestyle.

People who end up in the trauma center, more often than not, could have avoided ending up there, which was a very emotionally moving aspect of everything we heard while we were there. It hurt to know that they were so close to living all the years ahead of them. One second they were up and on their feet and the next they were gone, because of one little stupid mistake that resulted in a terrible outcome.

One of the most touching stories that we heard was about a little boy whose tragic death could have easily been avoided. When his parents went out of town, he was left under the care of his teenage brother. However, his brother had other plans; he wanted to hang out with his friends and didn’t want the responsibility of watching his 5 year old brother. So, while he and his friend smoked weed in the basement, he left his little brother upstairs with a movie on the TV, alone.

“every choice we make has consequences…””

About an hour later, the brother and his friends heard a thud coming from upstairs. They didn’t think much of it, considering they were having such a good time. Soon after, he went to check on his little brother upstairs.

It turned out that while he and his friends were in the basement, getting high and having fun, his brother had finished the movie and wanted to replay it. Being a small 5 year old, he wasn’t big enough to reach the controls, so he stood on a drawer to try and reach it. The TV tumbled off the shelf, collapsed onto his body, and crushed him under the weight of such a large object. By the time his brother had found him, his lungs had already stopped working. The little boy was taken to the Trauma Center, but the doctors and nurses couldn’t save him.

This story highlighted the fact that our decisions have profound effects on not only ourselves, but also the people around us. If the little boy’s brother had chosen to take care of his sibling instead of being irresponsible, the boy, whose whole life was ahead of him, could still be alive. The brother must now live with that guilt for the rest of his life.

This trip opened our eyes to not only the medical side of the Trauma Center, but also the emotional side. Every story had a lesson behind it, all accumulating to one theme: every choice we make has consequences, and we will have to live with them, no matter how hard that might be.

Please note that comments are moderated. The Smoke Signal staff intends for this area to be a place where users can interact and share meaningful discussions in a respectful manner. Name and email are required only for security purposes and validation of the comment.

If you want a picture to show with your comment, go get a gravatar.