Among Us Tips and Tricks 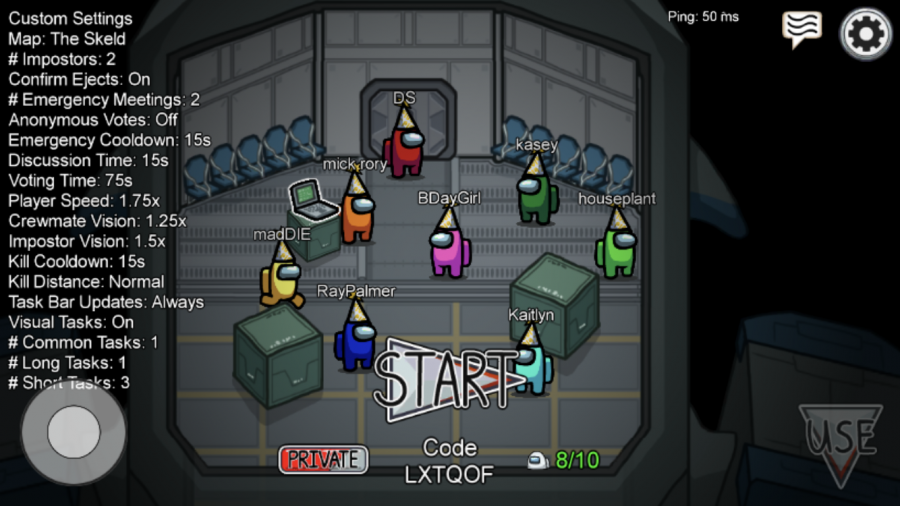 “Among Us” is a popular app that has gained quite a lot of attention this year, and it has given people a way to have a fun time playing with others while staying at home amidst a pandemic. Whether you need an idea for a quarantine birthday party or a chill hangout, “Among Us” has got you covered.

There are many tips and tricks for Crewmates and Imposters that will help you achieve success. Below are some neat strategies that you can use in your next “Among Us” game:
Crewmates
Don’t Vote on 4 – If there is one Imposter left and you aren’t sure who it is, don’t vote when there are 4 people. That’s because if you vote out the wrong player, the Imposter only has to kill one more person to win the game. Also, there is no harm in skipping a vote, especially if you have no clue who the Imposter is. It’s better to vote someone out with evidence rather than risking a loss by voting without any.

Stick Together – By staying in pairs or groups, the Imposter will have a hard time eliminating Crewmates without getting caught. Although it could slow down the process of completing tasks, it’s a safe strategy.

Watch for Faking Tasks – There are many ways to spot if a player is faking tasks. For one, when a player completes a task, the task bar will fill up. If you see that it doesn’t, then that player is most likely an Imposter. Some tasks can also take a long time to complete (such as Downloading Data) and so if the player “completes” the task in a quick second, they are definitely faking it. There are visual tasks as well, which allow you to physically see the task being completed by a Crewmate. If an Imposter tries to do a visual task (such as MedBay Scan or Shooting Asteroids), you can weed them out easily because there won’t be any physical indication that they are doing it. Every player also has common tasks, meaning that everyone has to do it. If you see that everyone is running to Admin while one player is heading in a different direction, you can count them as suspicious.

More on Visual Tasks – As mentioned before, visual tasks are able to be seen being completed by other players. This also means it is a good strategy to prove your innocence. For example, if a whole bunch of players witness you completing a Medbay Scan, they can vouch for you if someone accuses you of being the Imposter.

Hiding Stack – If you stand directly behind another player, you will be hidden from everyone’s view. With that said, if an Imposter kills the player who was covering you, you can report it right away, and reveal the Imposter to the team.

Fix the Sabotage – When an Imposter sabotages an area of the ship, don’t wait for others to do it, especially if it’s time sensitive. By leaving the lights off, or not fixing the communications, these sabotages will come back to haunt you. It will give the Imposter an advantage, and most likely make you lose the game. It’s even more important to fix the sabotage if it could take down the whole ship, like a Reactor meltdown or O2 depletion, because you could lose the game in 30 seconds if you don’t repair it.

Get Your Tasks Done Quickly – One of the ways to win the game as a Crewmate is to complete all of your tasks as a team. By getting your tasks done quickly, you have a higher chance of beating the Imposter.

Imposters
Sabotage – When you’re an Imposter, there’s a sabotage button on the bottom right-hand corner. When you click on it, you’re given different things to sabotage. You can close doors which will trap a Crewmate inside a room for a few seconds. You can sabotage communications which temporarily stops Crewmates from knowing the tasks they must complete until they fix it. Sabotaging communications turns security cameras off as well. You can also turn off the lights which limits Crewmate vision by making the surroundings dark, while Imposters can still see regularly. You can even sabotage Reactor and O2. Sabotaging Reactor and oxygen gives Crewmates 30 seconds to fix it before you win.

Split Them Up! – When there are a few Crewmates left, they’ll often stick together. An easy way to split them up is by sabotaging O2. When O2 is sabotaged, Crewmates have to go to two different locations and enter a combination to fix the sabotage. When Crewmates split up, it’s the perfect time to eliminate one of them. Often Crewmates will get too scared to split up, so they won’t end up fixing the sabotages in time, and once the 30 seconds are up, you win.

Stack Up – If you are standing in a stack and eliminate one of the Crewmates, others will not be able to tell who it was because of how close everyone was standing. To get everyone to stack up, you can sabotage lights, communications, or O2. Sabotaging those will result in Crewmates pilling up to try and fix the sabotaged subject. When they are piled, it’s the perfect time to eliminate one of them and not get caught.

Double – If you’re in a game where the settings have two or three Imposters, try doing a “double.” Go into a room like Electrical or Navigation, and if you, two Crewmates, and another Imposter are inside, consider eliminating the two Crewmates together. If you both click your kill buttons at the same time, you can eliminate the two Crewmates without either one having the chance to report the body. To make this easier, you can also close the doors.

Four or Six – If there are four of you left and you’re an Imposter, or if there’s six of you left and two of you are Imposters, then only two more Crewmates have to be eliminated in order to win. Lie and say one of the Crewmates vented, and say “if it’s not them, vote me.” Once the Crewmate is voted out, the others will know it’s you. So, check the emergency meeting countdown, and once there’s a few seconds left before they can call a meeting, sabotage O2. They will have to fix O2, or they will lose. Now that your kill cooldown is done, you can eliminate one of the Crewmates, and then you win.

Fake a Task – Instead of just walking around looking for Crewmates to eliminate, fake a task once in a while. But, don’t fake a visual task (since they’ll know it’s you), and don’t fake a one-part task. Fake a multiple part task, like wires. If it’s multiple parts, then the Task Bar doesn’t update until all parts are completed, so Crewmates won’t be able to tell if you’re faking. Another good task to fake is Admin swipe. At the beginning of the game, walk into Admin. If a Crewmate is at Admin swipe, then that means that all Crewmates have Admin swipe. Now, you can fake it, and when you see the Task Bar update, you can move away.

Do it While Downloading – To try and prove your innocence, go into Electrical with a Crewmate, and if they start downloading data, the task will block most of their view for about 9 seconds. Now you can vent from Electrical to Security, and if someone’s there, you can kill and vent back. Once the Crewmate is done downloading, the two of you can go to Security, and the Crewmate won’t think it’s you because you were supposedly with them the whole time.

We hope these tips and tricks were helpful! Try using them in your next “Among Us” game!